The Zeiss Ikon Contarex I, fondly called the "Bullseye" or "Cyclops" by some, is a beast of a camera that weighs about 1.2Kgs with the standard lens. Zeiss went all out with this camera, designing it for professionals and using their very best lens making technology, which for them meant that the lenses they made for this masterpiece were some of the best ever made! Zeiss management had reportedly challenged their engineers to make the best camera ever, money was no object, and perfection was the only goal. The "Rex" in Contarex was from the Latin for "King". Unfortunately for them, they released it in 1959, the same year Nikon and Canon also released their SLR's, and even worse, due to the intricate detail of the internals, this model, which they had hoped to be their flagship achievement, had some problems when used hard, with modifications coming late, and with the high price this led to its place in the market shrink. You can find many worn out or damaged cameras on eBay for very cheap prices, most are the early version, and none of them will have been CLA'd.

At the time of its' introduction, Zeiss Ikon was the worlds leading camera maker, 10 years later, they were out of the camera making business, and some point to this model as one of the main reasons, not to mention the Japanese competition. Note that all 3 of ours are the "Second Version" on which upgrades were made to the original design to make them more reliable. We would recommend that you avoid the 1959~First Version cameras/lenses, or any that have not been CLA'd as it would be a gamble at best.

The above said, the quality that Zeiss poured into this camera cannot be denied. Most that you find will 'appear' on the outside to be Mint or Near Mint due to the very heavy chrome plating and extra strong vulcanite covering. CLA work on them is not something that your local camera store repair guy is likely able to perform, they are extremely complex on the inside. Fortunately, I have access to an 'old timer' that loves working on these old beauties. On the outside conversely, they are quite simple, well designed for ease of use. All controls are well laid out and ergonomic. One unique aspect of this camera is that the aperture is controlled on the camera body, on the front and just below the shutter button, which takes a bit of getting used to, but works quite well. They also have interchangeable backs for those that like to swap film types quickly. They were the first camera  to have direct meter coupling to the shutter, aperture, and film speed-settings; they are interconnected by cords, a true innovation at the time. The viewfinder is bright and clear and makes focusing a breeze. Finally, the Lenses were exceptional for close focusing, much better than Leica or most others of the time, true masterpieces that people still find useful on even the most modern cameras, with an adapter, and they produce brilliant images.

While this camera may not be a bit heavy for some, its beautiful design and outstanding build quality makes it a great addition to any collection. We have just a few, and most (cameras and lenses) have been CLA'd. Enjoy...

Zeiss Contarex Special No. U24103, with pentaprism

There were very few of the "Special" cameras made. comes with its' standard Planar 50mm f2 lens and the rare and optional waist level finder as well.

The bonus with this great camera is that it was CLA'd in Japan by the master Hayata. It should have decades of shooting time before it needs any further servicing. You may see cheaper options at eBay, but as mentioned above and below, without the CLA your risk is great. Ours is in near Mint condition and will be a fine addition to any collection. Having both finder options is another big plus with this one! Not shown in the photos are the Cap, Filter and Case.

Wiki: The original Hologon (Contarex Hologon 8/15mm) was first released in 1969 as a f=15 mm f/8 lens affixed to a dedicated camera, the Zeiss Ikon Contarex Hologon. In this version, the lens is fixed focus and aperture; the size of the aperture is set by the incised notch in the second element. Depth of field ranged from 0.5 m (20 in) to infinity.[8] A bubble level is fitted to the top of the (non-reflex) viewfinder.[Typically, a pistol grip is affixed to the Hologon camera to avoid inadvertently taking pictures of the photographer's fingers.
Approximately 1,400 Contarex Hologon cameras were made; production continued through 1975 in small batches.

We originally had just the camera with its cap but later were fortunate to find the Grip with is shutter release as well as the beautiful case to keep it protected. See the photos below, we call it EX++ for some signs of usage but it remains a beauty. We have used it a bit and its working just fine. We have many more photos should you need more. 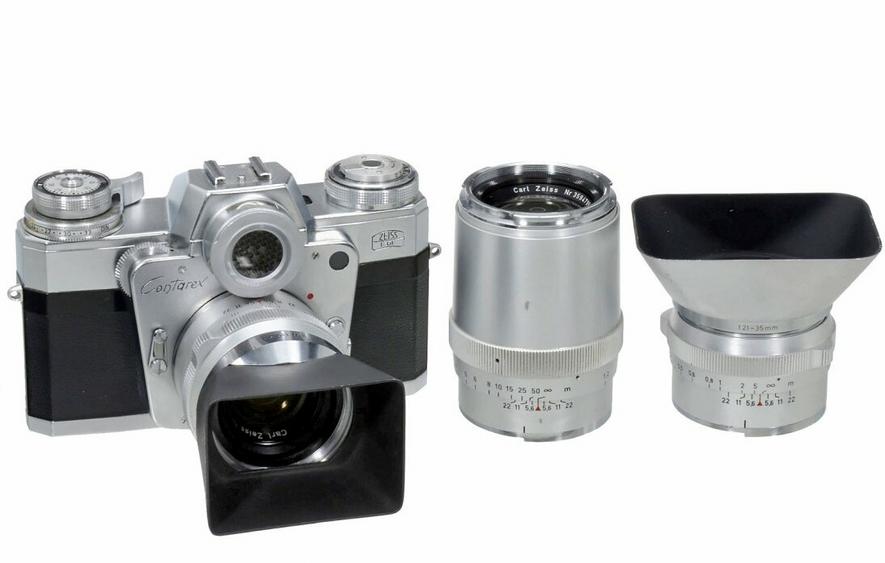 We have not yet tried film in this beauty but it is sitting in a prominent place as we love the Art Deco look of this 30's camera. Zeiss began making these due to the popularity of the Rolleiflex and were attempting to gain some market share. The first 2 versions of the Ikoflex were the most unique of the series, at least in our opinion. Our is in great shape and comes with its original case.

Zeiss Ikon Hologon, Contarex I, "Bullseye" & Ikoflex "Coffee Can" and even the rare Consol are some new additions to our collection. Interesting design concepts!

We picked up this little beauty many years ago and had it CLA'd here. A real piece of history and ours is in nearly Mint condition, with even the case showing very few signs of use. The lens is clean and clear also, but does have some minor cleaning marks as might be expected from a 70 year old, You will never see a cleaner example of this camera, unless someone has one still in an unopened box.

We also have a fair sized collection of Filters, Film backs, Hoods and other accessories for the Contarex system that I will get around to photographing and putting up here someday. In the meantime, should you require anything, drop us a line and we may well have it! 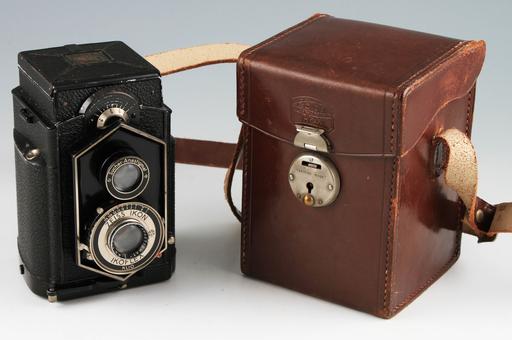 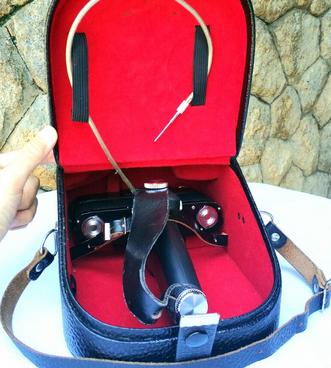 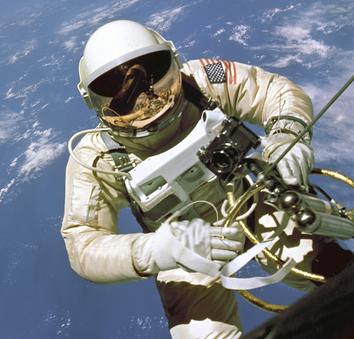 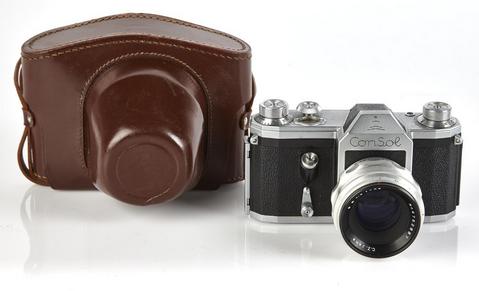 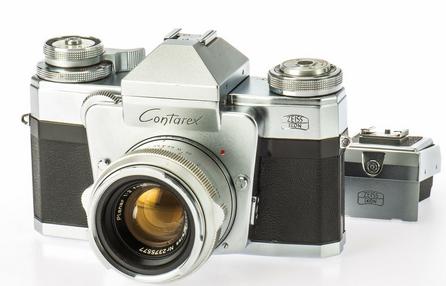 Can you recognize the camera that he brought along for a few "capture the moment" photos? Yes, it is a Black Zeiss Ikon Contarex Special. It was modified with a special top plate since with his space helmet on the normal viewfinder could not be used. A true Classic.

A word of caution: As the Contarex cameras/lenses are now over 50 years old they should be serviced before use. It is my understanding that due to the Zeiss use of what they thought at the time was the best available lubrication grease, it became apparent in the past decade or so that it needs replacement. This is true for the Camera and even more so for the Lenses, especially for the older original 35, 50, and 135mm lenses. All of mine will/have been CLA'd so it will not be an issue after completion. On the lenses, it is possible that they can be "Friction Welded" as the old grease basically fuses the focusing threads to the aluminum mount. Should you have a 'frozen' lens, it is difficult at best, and nearly impossible to get it back to usable condition in a cost effective manner. If you have a lens that begins to feel 'stiff' during focusing, it should be put aside until the grease is replaced. Once frozen, which can happen suddenly and without much other warning, it is too late to get it repaired easily,

Second, for the camera body, if the camera was stored for decades with the shutter 'cocked', the springs (for which there are no replacement parts available) may be stretched which can cause some drop off in the shutter speeds, especially on the high end (1000,sec).

But don't let the above scare you off of these masterpieces, the same or similar cautions could be said of many of the vintage cameras from the pre 1970's. A bit of service on them will go a long way to insure that they will be useful for decades, if not centuries to come.

If you are interested in a brief history of  Zeiss Ikon, my new friend Ian has a nice blog with many great photos of many classic cameras also: CLICK HERE 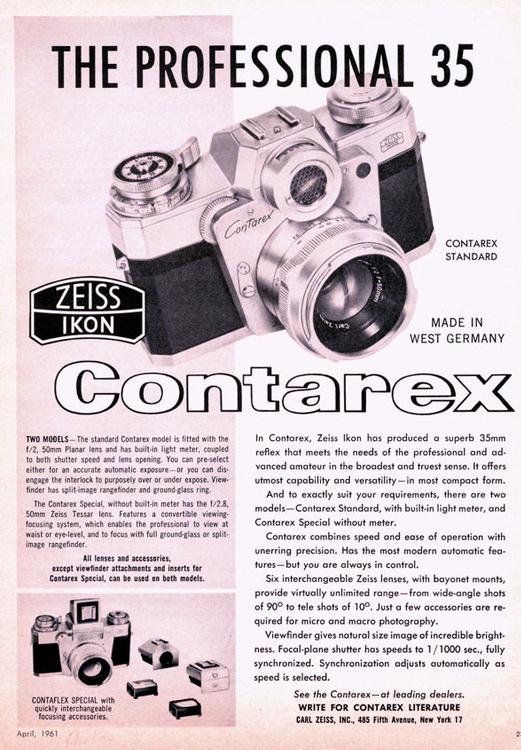