In an attempt to gain market share, Ducati produced the ‘Simplex’ as a more economical alternative to the Sogno. It was without a rangefinder, and the lens was not interchangeable, and was the 35mm / 3.5 ‘Etar’. It had an adjustable diaphragm between 1: 3.5 and 1:16. The shutter allowed times from 1/20 to 1/250 plus B. It cost 25,000 and could still use many of the accessories created for the Sogno.

At the time of the Simplex release the price of the Dream had been significantly reduced to 58,000 lire as well.

“After the flattering success obtained by our company Microcamera SOGNO OR 6401 accompanied by the most complete series of accessories for professional and amateur use, we are concerned with studying and making a new camera that, while preserving the original and rational principles of SOGNO, proved the true factors of success, could be offered at an interesting selling price to the general public."

With these premises, the new SIMPLEX OR 6404 Photo Microcamera was announced and we are delighted to inform the Spett. Clientele. The new camera preserves the dimensions and the aesthetics of the SOGNO and takes advantage of a large part of its normal use and laboratory accessories. The selling price to the public was set at 25,000 lira (machine only), Lire 27,500 (complete with stock exchange).”

The above quotation (translated) was a part of the letter with which the Commercial Directorate of Ducati presented the new Simplex micro camera to the photographic dealers. Compared to the older sibling Sogno the most important differences were:

For the rest, this new camera was the same as the Dream both in general appearance, size, and in use. Using the usual special cassettes with 35 mm film on which could be obtained 15 images of 18x24 mm (half-frame).

The Simplex was manufactured for about 3 years and underwent some minor changes during that period.

In the aforementioned book by Sandro Vascon on the Ducati microcameras, some small differences were identified, mostly internal and therefore not very visible, even at an in-depth observation:

We analyzed the images of about 30 Simplex and primarily focused on the last three features because we found that the first two were contradictory and inconsistent. On the basis of what we have observed, we consider the possibility of 3 variants that we have described in the table below to be valid.

The Simplex could use most of the accessories made for its sibling Sogno, and in particular for the Etar lens the same accessories could be used as for the Vitor 35 / 3.5.

The Ducati Simplex was manufactured in less than 8,000 units (serial numbers observed from 10001 to 17843), and is certainly a very sought-after device, like the Sogno, and can be considered uncommon (rarity index about 6 out of 10).

The Ducati Sogno, had a sibling, the "Simplex", and it is detailed below including the Serial Numbers by year, its price over the years, and it's general usage. Like its big brother, it can take professional quality photographs,
​ albeit with a fixed lens. 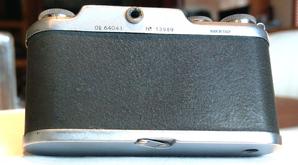 Acknowledgement: The above, as well as the majority of the informational pages in this Ducati Sogno section of our website, is a translation (loosely and with additional text added) by us of the the fine research and work of Mr. Donato Consonni. He is the owner/designer of the Italian Camera's website: http://bencinistory.altervista.org/ With his kind permission and help. 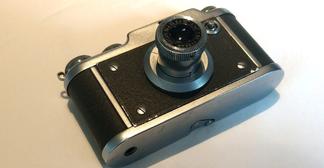 NEXT - ARGON LENS
View on Mobile