*The Gelatin Filters were only mentioned in the earliest documentation, and no pricing was mentioned. They are in various “Bright” colors, more intense than the normal glass filters, and much rarer. Most are degraded.

​Original text and tables by D. Consonni, with permission. Translated by MasterpieceCamera. © 2018 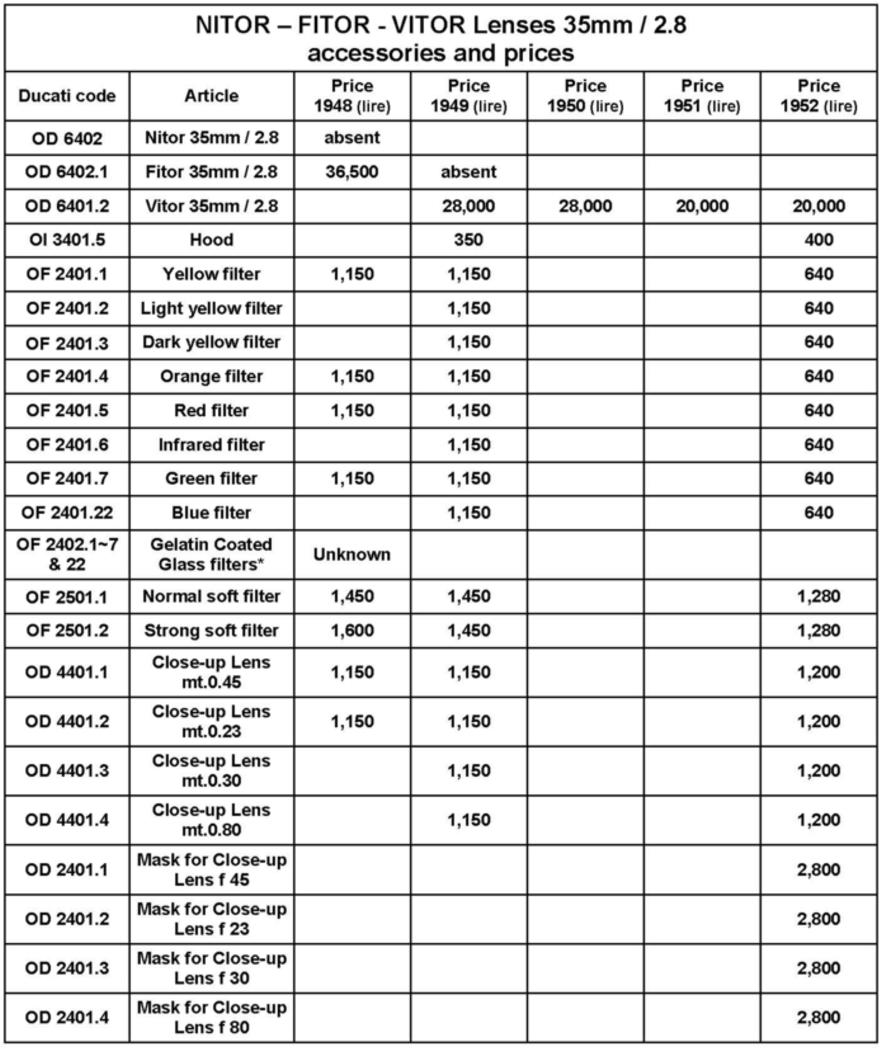 Among the lenses listed in the official Ducati documents of 1946 could be found the Nitor 35 / 2.8 which was suitable for "normal" use, similar to the Vitor 35 / 3.5, but could also be used in poorer light conditions.

It had an optical scheme consisting of 4 elements in 3 groups, and with anti-reflective surface coating. The lens was of the retractable type, was directly coupled with the rangefinder, and the framed field corresponded to that visible in the camera’s viewfinder.

The Ducati documents do not specify the Fitor optical scheme, but most probably it was the same as the Nitor since the other features were similar, although some minor design changes are evident vs the Vitor, notably the aperture selection ring configuration, number or aperture blades, and the slightly larger diameter of the Fitor front element.

Starting from the 1949 price list, the Fitor lens was omitted, and a second Vitor lens, with the same brightness of 1: 2.8 and a modified Ducati code OD 6401.2 appeared. Also for this revised lens the optical scheme was not specified, but it was most probably the same as the Nitor/Fitor.

It was always a standard type lens, with a minimum focusing distance of 0.80 meters and the angle of field was equal to that of Vitor 3.5 at 46 °. The Fitor had 10 aperture blades while the Vitor had 14. The diaphragm for both could be adjusted by choosing between 6 possible aperture openings (2.8-4-5, 6-8-11-16).

This lens could use all of the accessories of the Vitor 35 / 3.5 except the lens hood, which was in common with the Argon 28/4 lens.

We have seen only one of the Fitor lenses, and it is in our collection, so it was perhaps either produced only in very small quantities, or even possibly as a prototype. In any case they are extremely rare. You can see a few photos of it below. No Nitor versions have been observed by us to date. Update: In 2021 we found a second Fitor lens SN-02828 which is now also in our collection. Our original Fitor lens was 02831, only 3 digits away, so there was most probably a very small number produced. Perhaps 5 or 10?

Observing the serial numbers of a number of the later Vitor 35 / 2.8 lenses it is possible to hypothesize the manufacture of perhaps 2300 - 2500 pieces. The serial numbers of these lenses all start with the number 3. It should be noted that the latest Sogno cameras produced (starting from the 08500 serial number) were most often fitted this Vitor 35mm 2.8 lens as standard, thus the higher number were produced. Also because in later times the Sogno was also available "body only" and the price difference with Vitor 1: 3.5 was only 5,000 lire.

The Ducati Sogno 35mm Vitor or Fitor Lenses are the rough equivalent of a 45mm lens on a 'normal' full sized camera. This makes it a great choice for everyday photographic work, a true 'normal' lens. 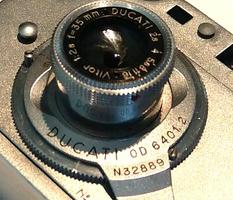 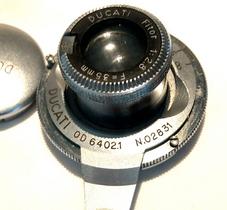