We found this camera some years ago from a seller in Italy, and he just had it CLA'd there so it is working great. We added a nice  case, strap and a new Fotodiox cap to protect the lens. The light meter is active. The CLA included a bit of well done touch-up painting, refer to photos for the visuals. All in all a beautiful set for this very rare camera. We would grade it at better than EX++. For the serious collector or photographer.

This is the later White Face version in excellent condition. It has been CLA'd here in Thailand and is in fine condition,. We would call it about Mint-/EX+++, there are just a few minor signs of usage, but nothing major, a few light cleaning marks. Great for using or collecting and includes Cap, Strap & a nice Case. 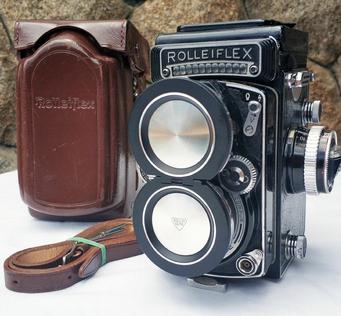 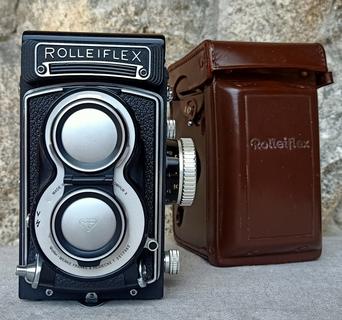 Camera-Wiki: The Rolleiflex SL66 is a 6×6 cm SLR camera made by Rollei. It was the company's first single-lens reflex. While the naming "SL" is most likely for single lens, the "66" probably refers to the 6x6 cm image format, coincidentally the camera was introduced at the 1966 Photokina show. The original chrome & black SL66 model remained in production until 1986.

This fine example is in very near Mint condition, an absolute beauty! We added a better type of neck strap (this cameras is a bit heavy!) and a near mint Lens Hood to complete the set. Paperwork shown is included as well. 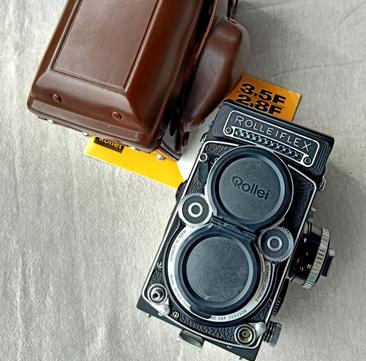 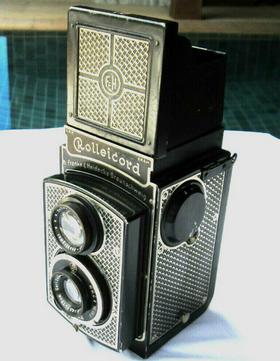 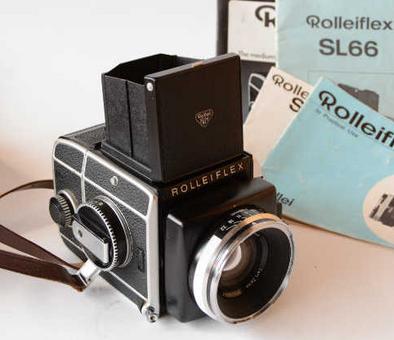 . This is a rare version of the "T" Model and one of the last productions of it. The Lenses are clean and clear with just a couple of coating marks, and the body has very few signs at al, one little ding and a few marks. We call it M- or EX+++ so it would be great for a collector. Its working fine but has not been CLA'd by us. Have a look at the pics below for exact condition. Comes with an original Case and we added the Satin  Cap. 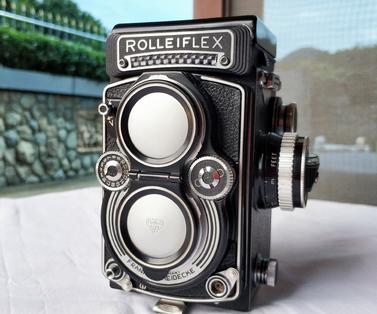 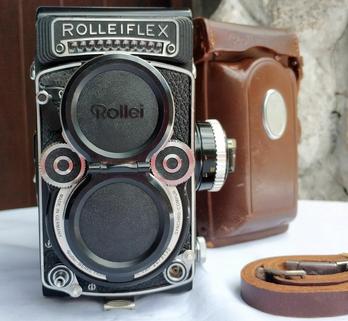 As above this is the White Face version in excellent condition. It has also been CLA'd here in Thailand and is working great, including the light meter. We would call it about Mint-/EX+++, there are just a few minor signs of usage, but nothing major, a few light cleaning marks. The previous owner did some minor paint touch-up that is barely noticeable.  Great for using or collecting and includes Cap, Strap & a nice Case. 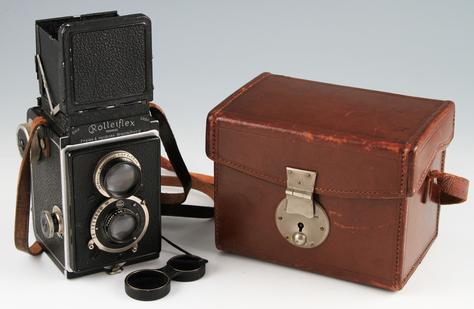 This is a nice entry level camera to get started with TLR photography. Condition about EX+/++ overall. Lenses good to excellent, view screen and mirror are usable. The body shows quite a few signs of use but overall not bad. The winding mechanism is a bit stiff and the low shutter speeds are a bit slow, but close. It can be used as is but would benefit from a CLA someday. Comes with full case (not shown) & Cap.

The Great Planar vs Zenotar & Tessar vs Xenar debate, or "Much Ado about Nothing"... Our Thoughts:

There has been much written on this subject over the past 50 or 60 years, just Google it and you will find dozens of articles on the subject, some highly technical. Perhaps Carl Zeiss was easier for Americans to pronounce than Schneider Kreuznach, or maybe it was Zeiss's good marketing efforts in the 50's there, but for whatever reason some pedantic 'collector's" have elevated the Zeiss fitted cameras above the Schneider, and for no good reason of which we are aware. Zeiss charged Rollei a bit more for their lenses some of the time, so Rollei had to pass that along, could that be it? Many technical studies have been done and in most cases the Schneider lenses win out for image clarity, at least post WW2, and for some professionals its more a matter of taste, with some saying the Planar are 'softer' (e.g. not as sharp). And I've read that in Europe (Germany) the Schneider Kreuznach are more highly valued... go figure!

BOTH are some of the best lenses ever produced, anytime, anywhere, with unmatched performance.

It is generally assumed that Rollei chose two lens providers, first due to the popularity of their cameras where they may have needed two suppliers to insure production flow was not going to be interrupted should they need more than one could produce, and secondly as insurance in the event one of them had any sudden production difficulties. Seems reasonable to us, and it worked for them.

So for us its back to our #1 Rule: "Buy the best quality you can afford". Finding a Rolleiflex with its lens in great condition is the key, not whether it has Zeiss or Schneider engraved on the lens ring. Either will perform better than our eyes will and I for one would never pay any 'extra' for a Planar just because some 'die hard' collectors like the name, but to each his own as they say... 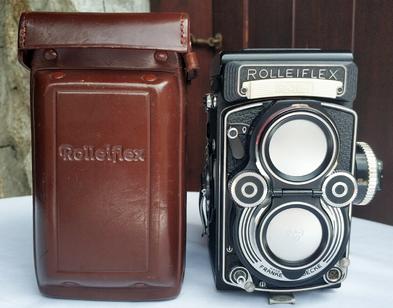 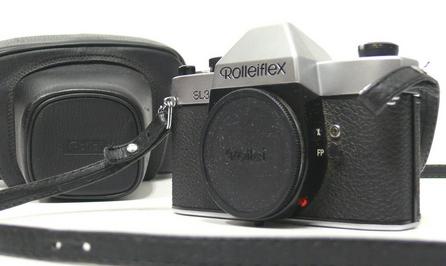 About 35,000 produced from 1929-32. 75mm Tessar 4.5 or 3.8 Lens.The Rolleiflex Original 612, second of the series namesake, will differ from the 611 as the most wide open of its optics with the sharp Tessar 75mm f 3.8 instead of the f. 4.5.  Ours is the Model I without distance scale on the focusing knob, the earliest type, and is in very nice condition (EX++ or better) and comes with its original leather carrying case which we have had re-sewn and its original lens cap. A very nice collectors piece as is and we have cleaned the lenses and confirmed that it is in working order so it is fine for use as well.

This nice camera comes with its full case & lens cap. Cosmetically it is excellent, about EX+++ in our view with some usage marks and other signs of use. The taking lens is excellent, no scratches or marks and the coating is beautiful. The viewing lens has some minor coating discoloration which has no affect. It hasn't been CLA'd but it is working well, with only the slowest speeds off. Can use as is or send it in to make it perfect. 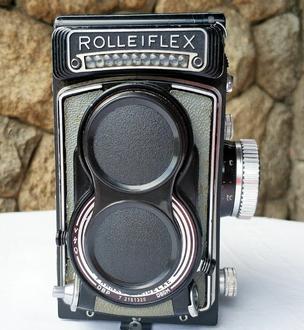 Additional Photographs are available, and if you have any comments or questions or would like to purchase or make an offer, please feel free to contact us.​

Camera-Wiki: The Rolleiflex SL35 was the first 35mm single lens reflex manufactured by Rollei. It was launched in 1970. It introduced a new bayonet mount and a range of Rolleiflex SL35 lenses. It is a nice and compact camera, with a cloth focal plane shutter up to 1/1000 and a built-in through the lens exposure meter, with match-needle reading in the finder. However the meter only works when you close the diaphragm, by pressing a button on the top plate. This feature was already outdated at the time it was sold. The SL35 has no built-in accessory shoe, it was sold as a removable accessory. The SL35 was sold in chrome or black.

A lightweight SLR that is simple to use and won't wear you or your neck out. We added 2 great lenses to the body we bought, the 50mm Planar f1.8 as well as the Rolleinar 28mm f2.8, both near Mint. It comes as shown with the case, strap, and body cap as well. An underrated gem!

$750 for the complete set (Camera/lenses may be sold separately)

A fine example of the earlier Type 1 models. We have had it CLA'd here and it is working fine. We call it about Ex+++/M- for condition, check out the photos and see what you think.

Camera-Wiki: The Art Deco Rolleicord I, in Germany colloquially known as the 'Tapeten-Rolleicord' (wallpaper Rolleicord) was produced by Franke and Heidecke from November 1933 to March 1936. In total, 32,508 units of the Rolleicord I Model 1 (factory Model K3 - 510) were built.

This example is in about EX++/+++ condition, some usage signs but overall in excellent condition. W cleaned it up at home as these older cameras are not so complex. The lenses are clear and it is working well. These unique beauties look good on any collectors shelf.