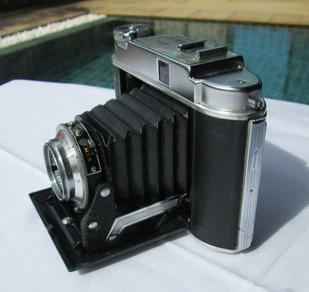 An interesting little camera that uses 127 Film. This little folder came as part of a set and I have not had the time to fiddle with it much but it seems to be in decent shape. It would no doubt benefit from a CLA and some TLC but the lens is decent and it is in better shape than most cameras from the 1930's. These were made in Germany between 1935~39 and can fit into a pocket  It came with the hood shown in the main pic, not sure if it is the original, but it works.

The Ensign Autorange 820 was introduced circa 1955 and production continued until around 1958. It is a Folding 120 roll film camera with a coupled rangefinder with Film Pane focusing.

One of the greatest Folders of all time! Our example of this "Cult" camera is in great shape, about Mint- condition and all functions working well. The coupled rangefinder and the sharp Ross lens on these make it well sought after for both collectors and users. It has been CLA'd and is ready for years of use. The body shows very minimal signs of use and the lens is clear with just a few cleaning marks as is usual, but perfectly working. Comes with its original case. 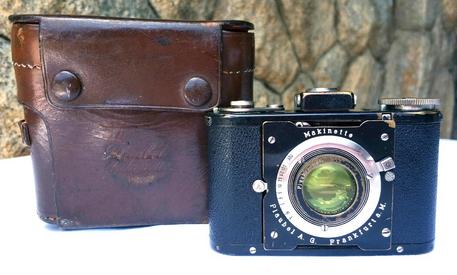 Camerapedia:  The Makinette was a 3×4cm format strut folding camera made by Plaubel around 1932. It had a folding optical finder (two variations), knob film advance with two rectangular red windows in the back to take 16 pictures on 127 film. Some of the design features were reminiscent of the Makina series. The leaf shutter, a Compur with speeds from 1s to 1/300, was hidden behind the front plate. The focusing ring was behind the shutter, and changed the angle of the scissor struts to move the front assembly.
The Makinette has been seen both in black and in chrome finish (with a Supracomar 4.5cm/2). The choice of lenses included Plaubel Anticomar 5cm f/2.7 or Plaubel Supracomar 4.5cm f/2

These are extremely rare! Ours is the Black version with the f2/7 Lens and we have had it fully CLA'd by an expert. This 90 year old beauty is in EX+++ condition and even includes its original case! It will shoot fine and uses 127 film. 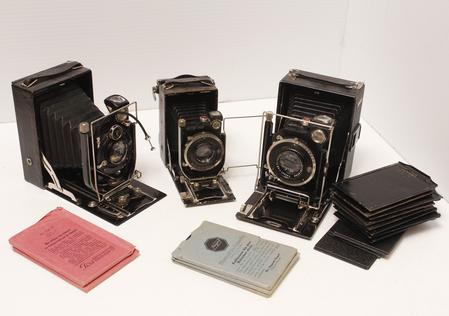 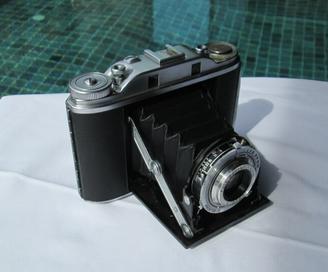 There is not a lot of information on these cameras on the net either, and most of the Recomar information available concerns the later ones made by Kodak. Dr. Nagel (One of the founders of Zeiss Ikon) made these between 1928~32, after which he sold his company to Kodak who continued making them until 1940. we have both one of the #18 and one of the #33. The 33's use 9 x 12cm Cassettes while the #18 uses 6.5 x 9cm or a 120 film back. The Kodak versions are not nearly as rare and can be had cheaply. These original Nagel versions are quite collectible and can still be used for vintage photography. The Welta camera is a beauty as well, but slightly more common. The Welta has the nice Tessar Lens. All three cameras are in excellent condition, see the separate photos below for details of condition.

For the Nagel #33 and the Welta Watson, the Focusing backs are included but we do not currently have any 9 x12cm film holders. The #18 comes with a 120 film back that the previous owner quite amiably provided so that is a great addition, but no focusing back is included.

We also have 6 Nagel 6 x 9cm Film Cassettes, 3 in their original packaging as new, plus a number of other 6 x 9 Cassettes by other manufacturers. These cassettes are available at an extra charge. 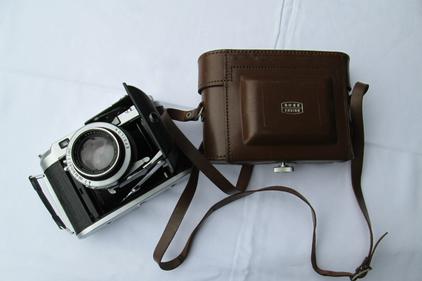 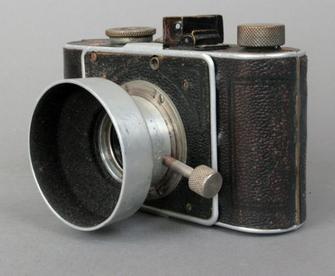 The Agfa Isolette III is a much more economical model than the above cameras, but still a big leap over the viewfinder models., It still uses 120 film making it a very affordable camera to get into Medium format photography. This one has the f4.5 Apotar lens with shutter speeds up to 300. This makes it pretty much a daylight camera imho.

It was completly CLA'd by Jurgen of Certo6 and he even put on brand new bellows. So while it is economical, it should last for decades of nice photography. It is in great condition all round, no major scratches or missing leather. Uses 120 Film.

There is not a lot of information on these cameras on the net, but I was surprised at its build quality. Made in Germany they are 6x6 format on 120 Film. This is a Viewfinder camera (no rangefinder) so you would think it to be rather an economy model. And most would be, especially if they have come with the standard Radionar lens. But this particular camera has the 4 element, 80mm  Xenar lens of Rolleiflex fame, so I would think that it is quite capable of taking great photos! Probably the lightest weight medium format camera that I have ever held.

It has been CLA'd by Certo6 and is in excellent condition, only minimal signs of use as per the photos at right.