From Paul Sokk's great website: Sugiyama has confirmed the release dates of most of the previous models but no such help with the Elite S2. Japanese Wikipedia says 1960. It also says that Leotax became bankrupt in 1959 (according to Mikio Awano, October 1959) so this may have been a way to dispose of an excess supply of Merite bodies. The Japanese source Nekosan says that both the Elite S2 and G were sold by the mortgager. Unlike with the TV2/Merite and T2L/Elite, the “S2” is unlikely to be a discreet model name but more likely to mean something like “Elite Series 2”.

This is one of the rarest of the Leotax cameras as only a few were put together near the end of the companies life. Ours is the nicest and most complete set we have seen of this model. We are parting with it reluctantly. The camera and lens are about EX+++ and working well. As you can see in the pics it comes with its original box and case and we have added an original Filter as well as the very rare Lens Hood to complete the set.

I spent many many hours trying to figure out what cameras I had. The Japanese Leica copies were made fast n furious for almost 10 years in the 50's. Luckily I found Mr. Paul Sokk in Australia, and his research helped enormously! For any of the Japanese classic cameras (especially Yashica TLR's!), check out his website HERE!

From Paul Sokk's great website: Also released in 1958, it is the same as the T2 except that slowest of the slow speeds has been removed and the slow speeds now start from 1/8. Another page on the Topcon Club website (text opposite the K3) claims that one of the Leonon lenses was also offered - to me, the K3 seems far too early for the Leonons). Of the eight K3s found with likely original lenses in my database, five (not including the above example) feature the Fujinon f/2.8 and three the Topcor f/2.8 also found with the T2.

While not quite as rare as the above set, the K3's are also quite uncommon. Ours is a beauty and we added the correct Fujinon lens to it to make it useable. Camera body about EX++ and the Lens about EX+++ The only accessory is the attached neck trap.

A piece of history, this is the original 35mm camera model from Leica. This camera does not have its original lens with it anymore, and I will be looking for one in the future, but perhaps you have one for it? The lens ring on the camera is the female part of the original lens, but the rest is missing. Also note that the "hockey stick" has been modified from its original full size, and the "Buddha" style lugs seem to have been added as well, probably a factory modification in the 50's is my guess.

Our is the 5 digit serial, which makes it more affordable than the 3 or even 4 digit examples, which can be very expensive. Condition is about EX++ and the shutter is firing well although sluggish at the lower end. The finder is clear and the camera seems to be functioning as intended. Would need some TLC from the next owner. 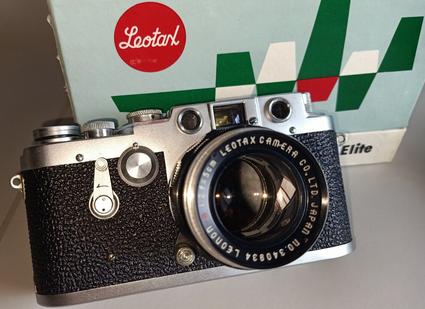 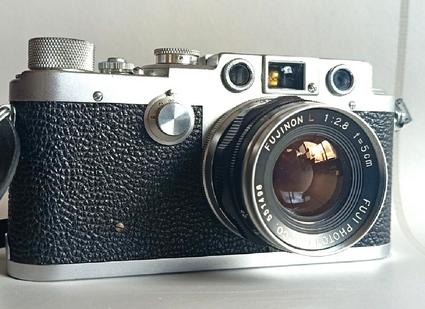 This rare Finder can be used with any of the Leica or Copy cameras (or any with standard hot/cold shoe). It could use a cleaning (some dust) but is fully functional. 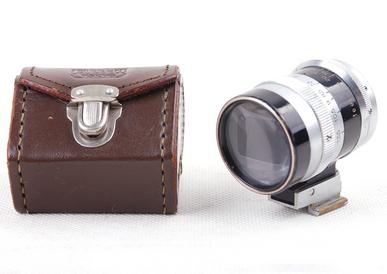 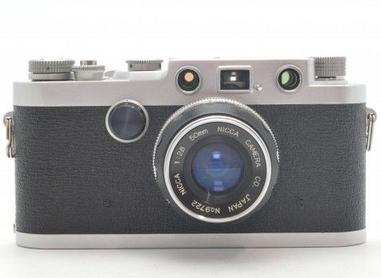 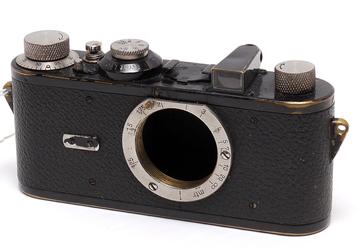 From Paul Sokk's great website: The final Leica IIIf look-alike model was the Nicca Type 33, probably released in early 1958 (no name on the top plate, “Type 33” label inside on the base plate). Mikio Awano and Japanese Wikipedia claim May 1958 which is the same month Nicca was acquired by Yashica, Peter Dechert says late 1957 and Sugiyama simply 1958. Unlike with the III-L, there are no Yashica fingerprints over any of the marketing material I have seen. Why “Type 33”? A Japanese blogger has suggested it is named for Showa 33, the Japanese era equivalent for 1958.

Another very rare Japanese Leica copy (we only collected the rarest types!) is this fine example. It is even rarer to find one with its original lens still attached, as with this beauty! The lens is the early small front barrel with 34.5 mm filter thread. We found an original case as well, although as with most of the Japanese leather it is a bit worn. Original Cap & Waltz UV Filter included. A rare find for your collection!

Additional Photographs can be taken if you need other angles, and if you have any comments or questions or would like to make an offer, please feel free to contact us.​