This is an exceptional lens and this particular example is in MINT/MINT- condition. It has just been CLA'd in April 2016 as well and is absolutely beautiful. It comes with the correct original Leica front and rear caps and it has the built in lens hood. It will work perfectly on any Leica from M1 through M9. Note that it seems to never have even been mounted on a tripod, a very clean example indeed! 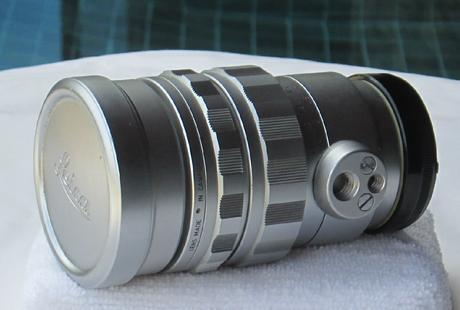 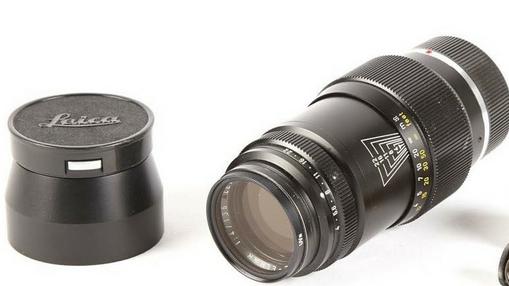 Ken calls it "This is LEICA's greatest 50mm lens ever," and that's quite a compliment! Our example has been used but is in fine condition, about EX+++/M- and we had it CLA'd so it is clean inside and out. We added the goggles and will add nice Lens and rear cap as well as a UVa Filter (not shown in the photos). Every Leica owner should have one! 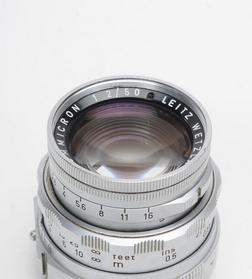 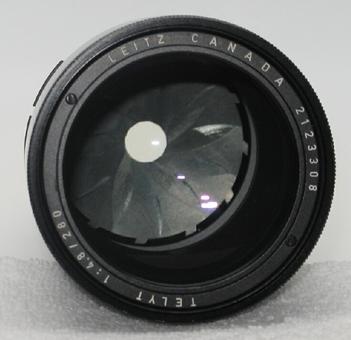 If the 280mm above won't get you close to what your shooting at, these babies will! These will go as a set so please don't ask for parts (Unless you are paying crazy prices :-).

These were made in Wetzlar, and as always... you guessed it... are in MINT to MINT- condition. The pistol grip and the attached Lens Mount could be called EX+++ and show some signs of handling, if not much use, but both Lenses and the shoulder stock are clean all around, with the exception of some minor scratches on the plastic knobs of the stock. I am posting a lot of pictures of these so judge for yourself. I think you will agree that these are one of the best examples of the Televit/Telyt system around.

Unfortunately, I only have the front cap for the 400, both rear caps and the front for the 560 are on my shopping list! If you have any to sell/trade, please contact me! I have purchased correct Leica Boxes for the set as well, though a bit worn. 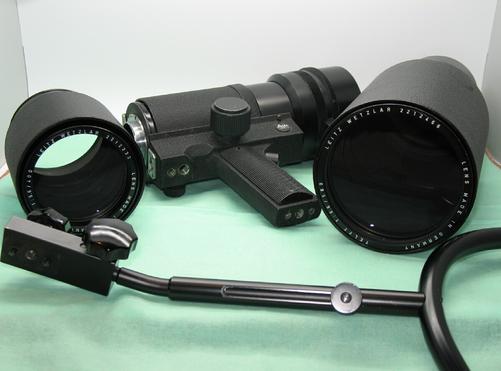 This is the screw version, made in Canada mid 60's. We also have the OUBIO adapter or the Visoflex II on our Leica Accessories page for use on the M Mount cameras. This beautiful 50 year old lens is in MINT/MINT- condition optically, mechanically, and cosmetically. No dings, dents, or scratches at all. Glass is clean and clear. As you can see in the photos it also includes the rare adapter ring (easily removable) for use with Leica's Televit system (I have a 400mm & 560mm Telyt/Televit complete system also if you are interested). As you should be able to see in the photos, it appears to have been never mounted on a tripod, like new. Correct box and original front and rear caps included, perfect for collecting or using. 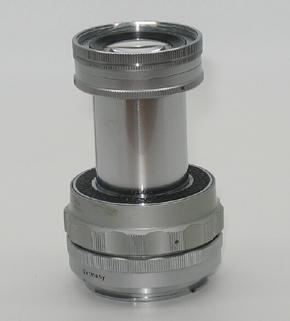 This example is in great condition, especially the glass. about EX+++ in our opinion for the body. Perfect for your M mount camera. Complete with its original front and rear caps, lens hood, and leather case (not shown).

"Big Time" Telephoto anyone? Look below...

Another well kept treasure, no scratches or dings on the barrel, just a few minor rub marks, glass and shutter look perfect. I'll call this one MINT-, have a look at the photos and you be the judge. Includes the original front and rear caps.

​From Ken Rockwell's Review:  The LEICA 50mm f/2 SUMMICRON with Near-Focusing Range is the greatest lens ever made by LEICA.
This is LEICA's greatest 50mm lens ever, and 50mm is the most important, useful and critical lens in any 35mm or full-frame system.
This SUMMICRON with near-focusing range is LEICA's greatest 50mm lens because:
1.) Its optical performance is not significantly exceeded by any other lens,
2.) Its mechanics are significantly more solid and more precise than any other lens made by anyone — ever. It is a solid-brass scientific masterpiece.
3.) It is the closest-focusing 50mm lens ever made for LEICA M. Today's lenses only focus to 0.7m, not 478 millimeters, but worse, newer lenses don't optimize viewfinder magnification at close distances for correct framing. THe close-up attachment seen below not only recalibrates the rangefinder, it also changes the finder magnification slightly to mirror the slightly narrower angle of view at close range, as well as correcting for parallax.

​From Ken Rockwell's Review:  This is Leica's first 90mm lens, designed in 1933 with four elements. It was sold in many different mounts, including the collapsible M mount seen from 1955. More common is the rigid screw mount, which takes a slip-on A36 filter.
It's always contrasty, but it's softer in the corners at the largest apertures. f/11 and f/16 are optimum.
This version is solid chrome-plated brass. Its collapsible mount is a work of genius: Leica has it locked-out so you can't focus, and therefore accidentally shoot, unless you have it fully extended. It works great on everything including the M7, but look out: Leica specifically cautions not to try to mount this lens on the M9.