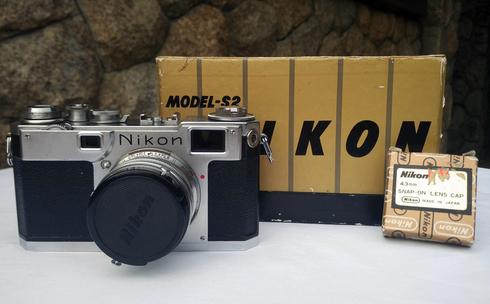 The Nikon S3 came out in 1958 as a cheaper alternative to the SP but with an even better rangefinder view. It may not have as many framelines as the SP, but the view is clearer.

This one is in excellent condition, fully functional with a working rangefinder, patch is clear but viewing system could use a cleaning. Smooth controls and cosmetically about EX+++ for the camera body and M- for the lens, very very few marks, the glass is in great shape.  Would make a nice addition to any collection.

In 1963 Nikon made the last of the S3 models, to commemorate the Olympics held there. Ours is in completely original condition, with its original Olympic 50mm f1.4 lens, both of which were completely CLA'd by the good Nikon folks at Kiitos in Japan. The lenses for this special edition are an improved version of the great 1.4 that had already been in production for many years.  A rare and stunning example in perfect working order and beautiful condition.

As most of the old Japanese cases are in poor conditionso we added a brand new S3 case from the later year 2000 S3 release which is in perfect condition. We will include the Lens hood also (not pictured). 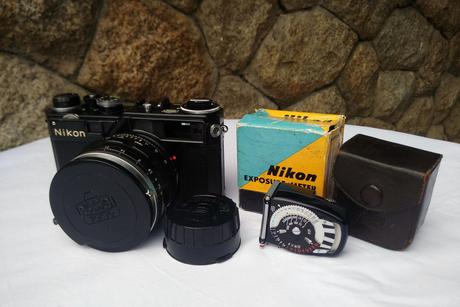 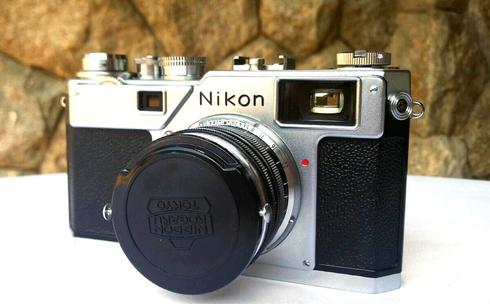 The Nikon S4 is somewhat rare, with the fewest number made of the S series rangefinders.

Both the Camera and lens are absolutely beautiful and the camera has been CLA'd at Kiitos in Japan. A Near Mint set perfect for your collection.

OK, lets start with what many people consider the finest rangefinder camera ever made, the Nikon SP. Ours is the later version with the titanium shutter and is in completely original condition, and verified by serial number by the NHS as authentic. It is in excellent condition and we have added the historic Nikkor-N 5cm f1.1 lens in near mint condition as well as an original SP Light Meter that is boxed and Like New cosmetically, and has had a new cell installed and is working perfectly.

Both the camera and lens were completely taken down and Overhauled at Kiitos in Japan, not cheap but they now work like new. The lens has both original caps & the UV Filter. A remarkable set! 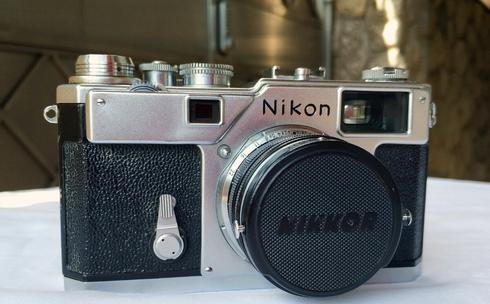 Nikon F cameras are known to most, even the younger generation, and they are great cameras for sure, but before them were the Nikon Rangefinders, and they should never be forgotten. As we have worked in Japan often, we were very fortunate to be able to find some great cameras, and even a few good deals while there. And best of all we could get some local camera masters to do CLA's on most of them. The old Nikon retiree's at Kiitos are top in their field, and we were lucky to be able to use them while they are still working. Most were purchased as our private collection, especially the rare Black versions, but its time to start letting go of some of these as well for others to enjoy also.

The Nikon S2 came out in 1954 and was the first Japanese camera with the film advance lever and return crank. These early rangefinders are very collectible and command prices higher than even Leica cameras of the period.

This one is in excellent condition, fully functional with a very clean and clear view and rangefinder patch, smooth controls and cosmetically about EX++ for the camera body with signs of usage as can be seen in the photos. It comes with its Original box as well. The lens we added to it is Near Mint, very few signs of use and the glass is in great shape. We added a like new Lens Cap to complete the set. A fine user camera or would make a nice addition to any collection. 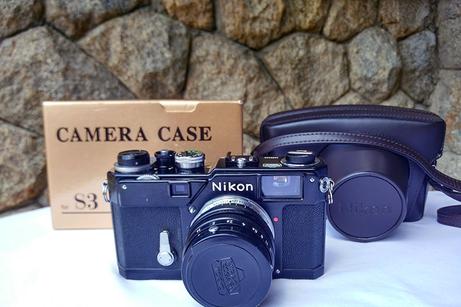