The Ducati Sogno, the "Dream" microcamera created by the Ducati Brothers is detailed below including the Serial Numbers by year, its price over the years, and it's strengths and weaknesses.
​For such a minimal size, it packs a great punch with it's sharp lenses!

"The Ducati presents the new device "Dream" true dream of a summer night for the lover of the small format (18x24 mm). Extremely accurate processing, task ability and lightness, without bumping for this the classic accuracy of precision: so indispensable in micro-mechanics. Five objectives, coupled to the rangefinder, allow any distance, even far away. This "dream" does not disturb your sleep today, as it is a good value at 35,000 lire. So wake up, amateurs! And we are grateful to this great national statement, which puts us in line with the best foreign products!"

With these words (translated) a journalist of the "Progresso Fotografico" spoke about the Ducati camera on display at the 1946 Milan Fair.

The SOGNO microcamera was a very compact device for the 18x24 mm format (half-frame) on 35 mm film in special cassettes, and from each piece of film, around 15 frames could be obtained. It was made of steel with chromium-plated top and front plate and a central body-back covered with black imitation leather.

The shutter was a curtain type and allowed times from 1/20 to 1/500 plus laying B and was made of rubberized silk, with a special gate formed by two doors that protected it from light, and opened only when it was actuated.

The lenses were interchangeable with a unique bayonet mount, and the lens fitted as standard from the beginning was the Vitor 35mm 1: 3.5 lens with 3 coated elements, and with an adjustable diaphragm between 1: 3.5 to 1:16. (Most later cameras were fitted with the brighter 2.8 Vitor as standard in 1952)

It was possible to precisely adjust the focus by means of a rangefinder, separated from the viewfinder, which showed a portion of the frame. The eyepiece of the rangefinder was adjustable by a diopter to correct for small defects of vision of the photographer.

One of the main advantages of the Ducati Sogno microcamera was that of having the interchangeable lenses, and so, many different fine optics were produced over time. Moreover, a set of elegantly designed accessories was created to be used both during photography and also later on for the treatment of the film in the darkroom. The lucky owner of this device had nothing to envy from those who used the more well-known cameras of the time.

The actual production of the Sogno micro-camera began in 1947 with the announcement:

“On April 26th at the Ducati headquarters, in the presence of the members of the Circolo Fotografico Milanese, amateur technicians and press representatives, the Ducati brothers officially announced the start of mass production of the new Ducati 18x24 micro-camera.”

The camera was subsequently presented in Rome and in the other main Italian cities.

In November of the same year the Ducati announced from its Newsletter:

"In November, the Ducati optical plants completed the start-up period of the construction and assembly lines, and have reached the normal production regime of over 1000 micro-cameras a month... of this bulletin because we are sure to be able to say goodbye at that time to be able to salute from these columns the dismissal of the 10,000 micro-camera."

The assembly lines of the Dream were ready only at the end of 1947 and a monthly production of 1000 units was planned for 1948, but the actual number of cameras/lenses made was actually much less. The reasons for this lack of productivity were many, often more of a socio-political nature than commercial. To believe what Bruno Ducati narrates in his book, in 1948 various strategies were implemented by the governmental body F.I.M. (Financing of the Mechanical Industry) in an attempt to remove the ownership and control of the company from the Ducati brothers. In such a conflict situation, even the workers began to show their dissatisfaction with various trade union actions.

To this we can add also reasons that related to the potential customers of the Dream. At the 1946 Fair when the camera was introduced, the price of the Microcamera had been announced at 35.000 lire, but subsequently upon release, the actual price was fixed at 80.000 lire, more than double! A price that was perhaps too high even for any valuable photo camera at this post-war time, even as was surely the Dream.

Like all such cameras, the Dream had its strengths, but also its weaknesses.

On the other hand, the most important weaknesses were:

The Dream was manufactured in series from 1947 until 1952 ca. and during that period it underwent various modifications. In a previous article by D. Consonni he had indicated 4 different variations
that differed in some details concerning:

Subsequently, upon further research in the Sandro Vascon book on the Ducati microcameras, in which he focused on other small details of the Dream, he was able to further define the variations:

Looking at all these details on the images of about 50 Sogno cameras he came to consider the possibility of 7 different variants that are summarized in the comparative table below.

To these we can then add another 2 variations. The “Per Collaboratore and Non-Cedibile” versions were produced. So it was that not all of the cameras were marketed or sold through ‘normal’ sales channels. Some were given to employees, others to associates, and at the closure of the Optical Section in 1952 the cameras still in stock were sometimes offered as gifts to the buyers of Ducati motorcycles.

Then there were also the display units in which the internal mechanical parts were missing.

We must finally add a tenth variant, the Synchronized Dream, characterized by the presence of the flash-synchro contact on the front plate, at the bottom left. This type had the code number Ducati OR 6401.11 which was different from that of the normal Dream (OR 6401.1) and a serial number greater than 09400. It is noted that the final “1” of the OR 6401.11 code number for the Synchro cameras had been added and stamped “manually” on a normal OR 6401.1 Sogno body, and can usually be seen as having been so, see left photo.

At the closing of the Optical Division in the laboratories of the research and development department, there were also some more or less completed experimental models (prototypes), such as the Sport model with longer shutter times (times from 1/100 second to 1/3000), a "taller" model with slower shutter speeds (1 second to 1/500) or with special reptile skin covering that were dispersed to family or given away to employees and or associates.

The Ducati Sogno was manufactured in total in less than 10,000 specimens (serial numbers observed from 00091 to 09501) and of these very few were synchronized, the exact number is unknown but all were from a part the last production sequence. Ducati did offer a different flash synchronization as an upgrade to older cameras, but it did not have the same finished look as the OR 6401.11 model.

We will describe in other tabs the lenses and accessories manufactured for this beautiful camera.

Regarding the Sogno  “SPORT” version, of which only 1 camera is known:

Also in 1950 was designed, and perhaps produced in very few examples, a model of micro-camera called SPORT with the same characteristics of the Dream, but with the exception that the shutter allowed very short times, from 1/100 to 1/3000, without B. Only one has been confirmed to exist.

In the book by Mario Malavolti "The Microcameras of the Ducati" is instead shown the image of a Sport camera, with the following comment:

"The only known Sport, which comes from a member of the Ducati family and therefore should be an original, carries the code OR 6401, serial number 01224, which suggests that the idea of producing the Sport was really planned as code OR 6403, but that in reality the model viewed, and perhaps unique, was made on an old body Dream.

The new speed range was obtained with the modification of the pull-back spring and outwardly the camera differed from the Dream only for the different indication of the shutter speeds available on the speed selector button."

To the words of this expert researcher we believe there is nothing to add.

Of the Dream camera there are many variations and particular models that we will show as
​Variants in the specific Table below:

Acknowledgement: The above, as well as the majority of the informational pages in this Ducati Sogno section of our website, is a translation (loosely and with additional text added) by us of the the fine research and work of Mr. Donato Consonni. He is the owner/designer of the Italian Camera's website: http://bencinistory.altervista.org/ With his kind permission and help. 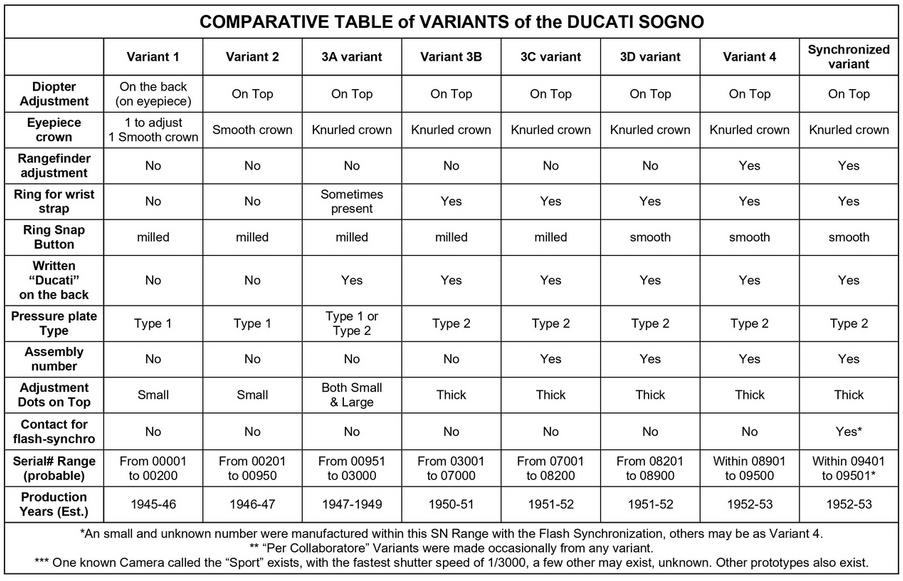