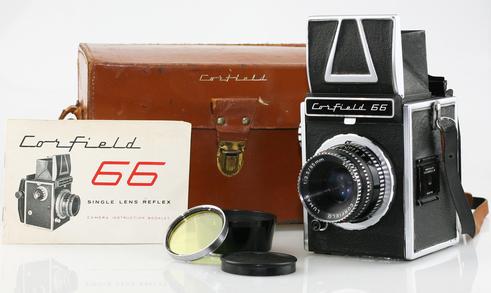 This was the last model produce by K. G. Corfield, originally from Wolverhampton in the UK, but this last model was manufactured in Ballymoney, Ireland. Most writers agree that only around 300 of them were ever produced, so they are quite rare, and even rarer to find with their original case, manual, hood, cap, & filter. Others say there were nearer to 1000 made, either way it is quite rare! I have read that the only other accessories ever made for it was a grip and sheet film holder, and we don't have those (yet), but the set we have is very complete. It is classified as an SLR but uses a 120 Film back so it is Medium Format, and will take 4x5 sheet film as well. It may not be priceless, but it is a beauty. Ours has been CLA'd and is working fine.